What are State Machines?

State machines are a special kind of logic management, that relies on a series of states. Each state has two properties:

State machines are used all over the place, especially in classical programming. They aren’t only found in minecraft! You can learn more about state machines here.

The reason that state-machines are useful, is they allow us to naturally break up our animations into a logical flow, where each state handles its own animations and its own logic.

For example, imagine you want to animate the spinning blade of a helicopter -but only when on the ground. You have two states:

We can annotate these states with the two pieces of information described above:

Here is the state-machine, visualized as a flow-chart: 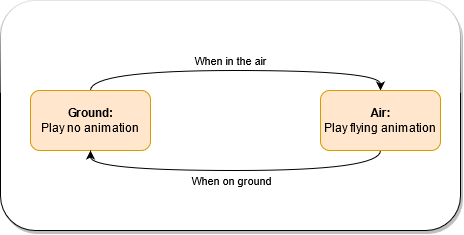 In this flowchart, states are represented by rectangles, and arrows represent transitions from one state to another.

Flowcharts are a nice way to visualize multi-state finite-state-machines, is it allows you to follow the logical flow of the animation. Let us look at a more detailed example, which adds a third explode state: 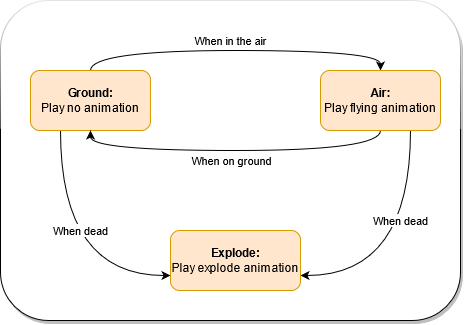 As you can see, states can go to more than one state at once. States can also be dead-ends (since the helicopter is dead, and doesn’t need further animation). The branching flow of animation-controllers is a large part of what makes them powerful.

Animation controllers go under the animation_controllers folder, in either the RP, or the BP. Lets look at a sample render controller for our State Machine from above:

There is… a lot going on here. Lets break it down, step by step. As we do so, remember two things:

The reason we use default instead of ground is that Animation Controllers need a default state. That is to say, the default the state they will start in when they load into the world. While it is possible to define a particular state as the default, I think it is clearer and more consistent to use default. By default, the default state will run first.

The default state contains a list of transitions, which is how we get to other states. In this example, the default state is saying: Move to the flying state when query.is_on_ground is NOT true. In other words -start the flying animation when we fly into the air!

The flying state also contains a list of transitions. In this case it contains the opposite transition: Move to the ground state when query.is_on_ground is true. In other words -move back to the default state when we land on the ground!

Alongside the transition list, there is also a list of animations to play while inside of this state. In this case, playing the flying animation. This animation will need to be defined in the entity definition file for this entity.

Through the examples, hopefully you are starting to get some concept for how animation controller flow works. In this section, I will explain it more explicitly.

1) Run any animations in the current state (will loop if set to loop, otherwise it will just play once) 2) Check all transitions to see if there is any valid transition. Search from the top to the bottom of the list, and move to the first valid transition.

Because of the way animation controllers are setup, it will only move from state to state at a MAXIMUM of once per tick.

warning: Animation Controllers “reset” when an entity reloads (player join/leave, chunk reload, etc). This means that it will “jump” back to the default state. You should always have logic in your default state that can handle restarting any critical animations.