This tutorial will teach you how to get up and running as a Minecraft Bedrock Edition (Windows 10) script modder!

Setting up your environment

You will need access to the Minecraft installation folder - this is where we will be doing most of our work. You can find it here (replace <USERNAME> with your Windows 10 username):

You should probably make a shortcut to this directory as it’ll make development quicker as time goes on.

The sub-folders that we are most interested in are:

These are the folders that our packs will exist in during development. Behavior packs hold server code, resource packs hold client code, and skin packs hold skins for your in-game character. You might have noticed that there are some other folders that are named something very similar:

These folders are where completed Minecraft Bedrock Edition packs go. For the purposes of this tutorial we will only be focusing on the creation of a behavior pack (not a resource or skin pack).

Let’s get your code editor set up:

Sweet, everything is set up and now we can get to work 😎

From now on, the rest of our work is going to be from within the HelloWorld folder we created in the last section. First things first, let’s create some new folders and files.

Last but not least, download this image and place it in the HelloWorld folder:

Here is what each file does:

What’s the difference between ‘server-side’ and ‘client-side’?

When we say “client” or “server”, it usually follows with a fairly intuitive understanding of what part of the game we’re talking about. After all, a client is what the user interacts with, and a server is where the user connects for a multiplayer game. Easy, right?

As it turns out, there can be some ambiguity even with two such terms. Here we disambiguate the four possible meanings of “client” and “server”:

Our clientScript.js will run within the logical client and will handle most things that interact with the visual world that a player may see through their physical client. Our serverScript.js will run within the logical server and do most of the heavy lifting for your larger packs. Most code will be written here because it is the safest (and sometimes the only) way to get certain things done.

For instance, we don’t want to let just anybody be able to write code in their own client script that lets them know exactly where all players are in the world (e.g. in PvP matches) or lets them fly/teleport all over the place at will. Only the server script can do those things, which makes sense because the server script is the most trusted resource in an addon. It knows all and does all.

To recap, your manifest.json file defines your behavior pack; its name, definition, authors, how it ties in with other behavior/resource/skin packs, etc.

Copy/paste this into your manifest.json:

But what about <uuid-1>, <uuid-2>, and <uuid-3>? What even are UUIDs? UUIDs are “Universally Unique Identifiers” which basically just means a fancy string of characters (letters and numbers) separated by a couple hyphens. UUIDs don’t hold any special value intrinsically - for our usage, they’re basically just random numbers. You can generate UUIDs via an online tool like this, https://www.uuidgenerator.net/. You can either choose UUID version 1 or version 4, it’s up to you. Generate 3 UUIDs and replace <uuid-1>, <uuid-2>, and <uuid-3> with them.

The section labelled "metadata" provides information about you and your repository of code. You can provide it your name via the array of "authors", the "url" of your GitHub/GitLab/etc repository where you’re pushing your addon’s code, and also a "license" to protect your code from copyright 😈

The section labelled "header" provides information about your addon like the addon’s "name", "description", "version" (e.g. [0,0,1] which means version 0.0.1), and "min_engine_version" (which is the minimum Minecraft version your addon is aiming for - e.g. Minecraft v1.14.9).

The section labelled "modules" provides information about the code that will be ran on the server ("data") and the client ("client_data"). Nothing too special is happening here - just remember to generate distinct UUIDs for both of them, and when you increase the version of your addon increase the version numbers here as well.

The section labelled "dependencies" provides information about other behavior/resource/skin packs that this behavior pack depends on. When a user selects your addon in Minecraft when creating a new world, the game will automatically load up every other pack defined in this section into your new world (as long as those packs have also been installed alongside yours).

For example, let’s say that you created a resource pack with new blocks, items, and crafting recipes and you want to make sure that it is always loaded into a world everytime a user loads your addon. Here’s what that would look like:

You literally just specify the UUID of your resource pack and the version. This is so Minecraft knows exactly which pack, and what version, to load. You don’t have to worry about this for this tutorial.

Now that you have a valid manifest.json and a pack_icon.png, you now have the bare-minimum behavior pack contents that Minecraft will be able to recognize and load! Let’s open Minecraft Bedrock Edition and see what happens.

Go to “Create New World” and click on the “Behavior Packs” button in the lower-left “Add-Ons” sub-menu.

Your Hello World addon should show up in the list of behavior packs!

Clicking on your addon should bring up a button titled “Activate”. Click it.

After clicking “Activate”, a pop-up should appear titled “Turn Off Achievements?”. For obvious reasons achievement getting has to be turned off when addons are loaded as they could potentially make it easier to achieve them. 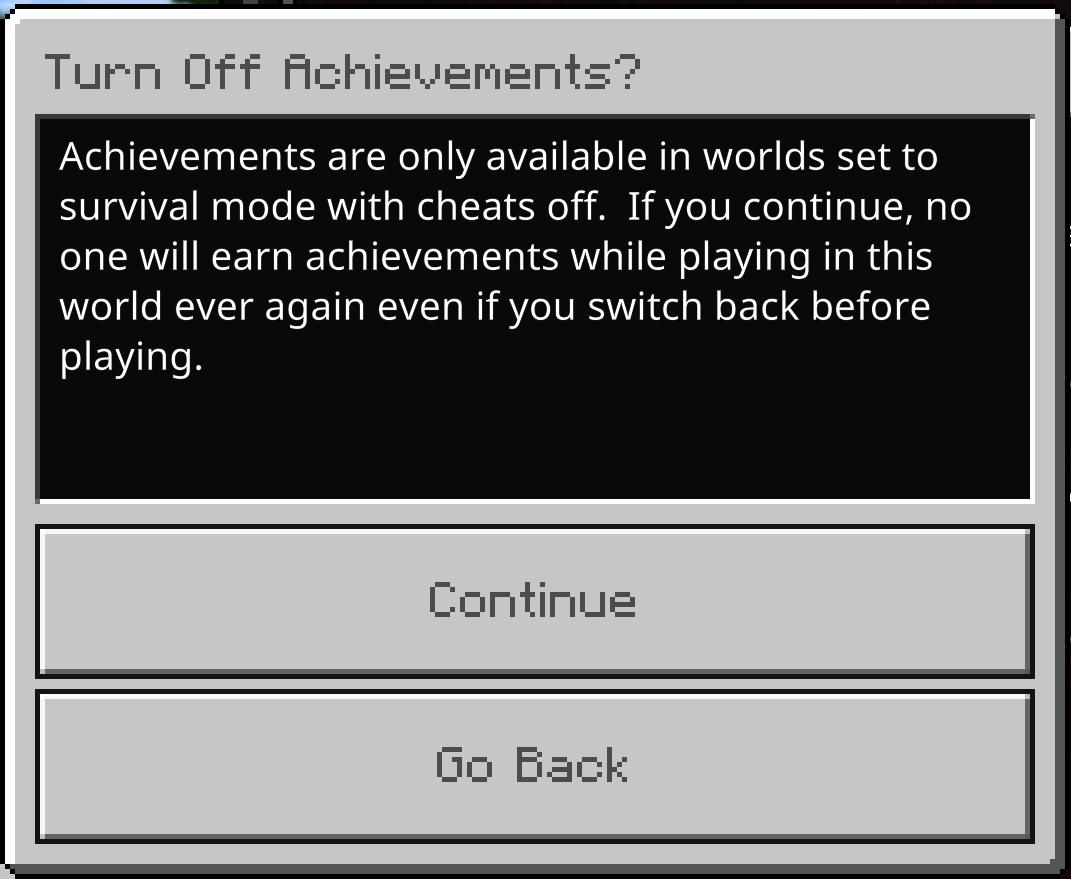 After clicking “Continue”, your behavior pack should have been moved to the “Active” section! 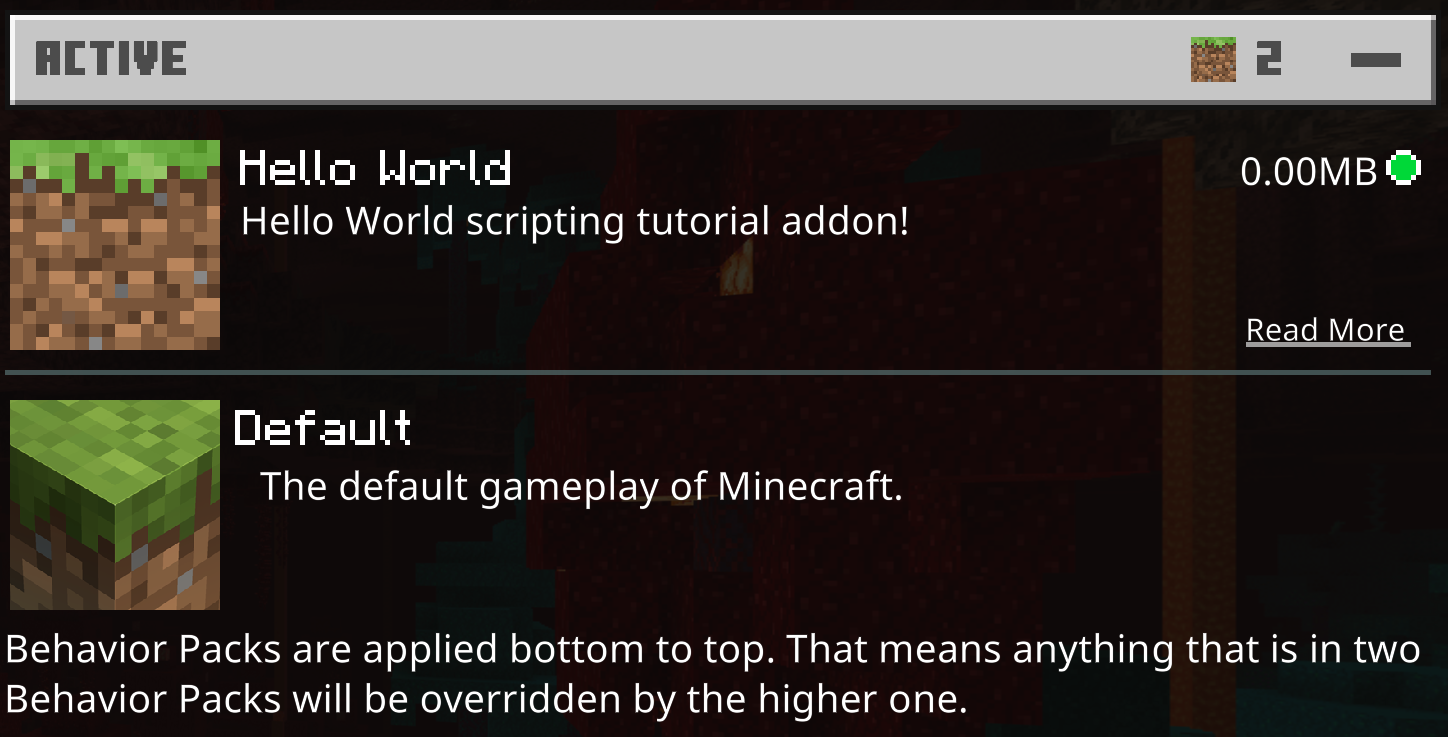 The next most important part is to enable “Experimental Gameplay”. If you don’t enable this then none of your scripts will work at all! Scroll down until you see this toggle button and turn it on.

After turning it on you will see a pop-up titled “Activate Experimental Gameplay?”. Select “Continue”. 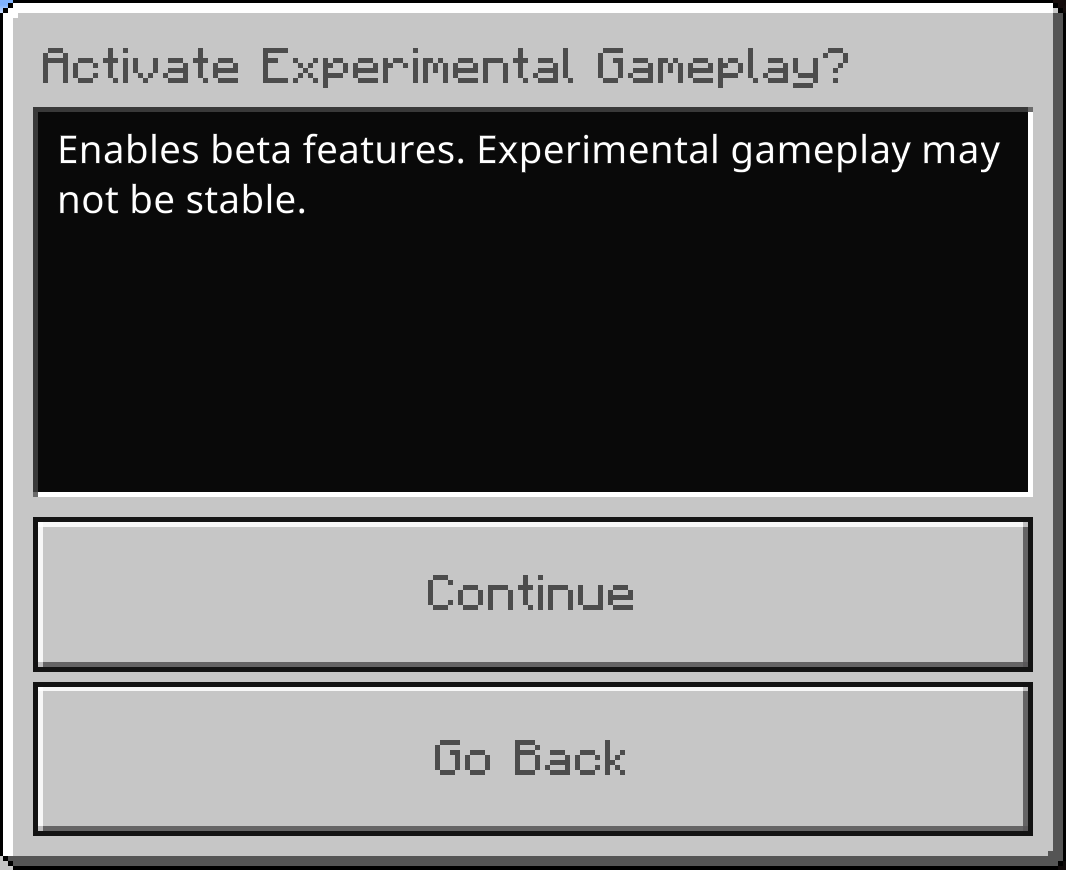 While you’re down here, you can toggle any other options that will make development easier. Here are some that I prefer to have on. 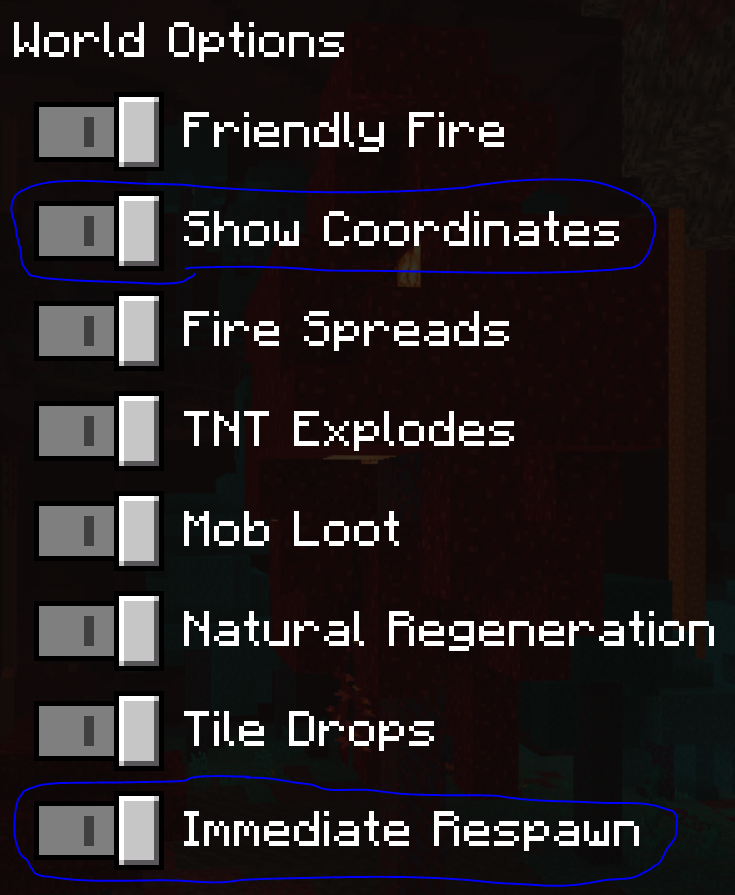 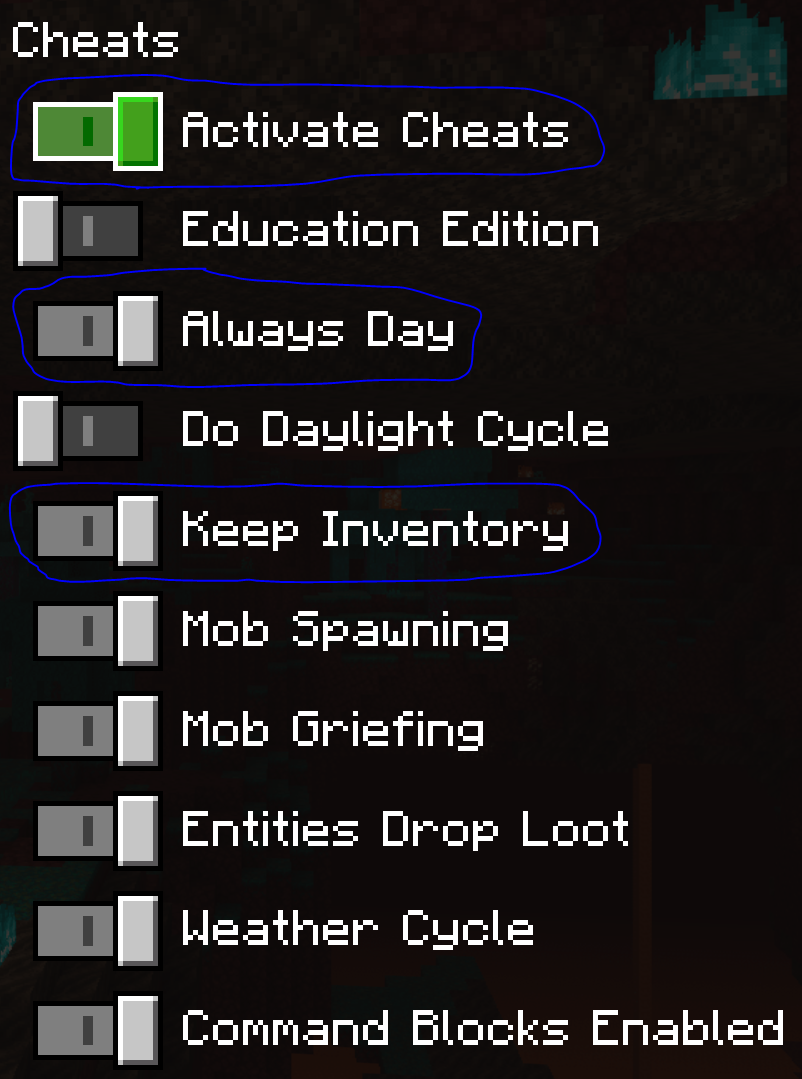 That should be it!

Now that you have selected for your addon to be loaded in with your new world, feel free to hit “Create” and start it up!

The first thing that you should see when your world is loading is another pop-up titled “Enable Scripts?”. This appears so that everyone knows for a fact that some non-official code will be ran when they join your world. This is helpful to prepare other players for random bugs that could appear due to a random addon, or just any other hijinks that you as a mod-maker will put them through :) 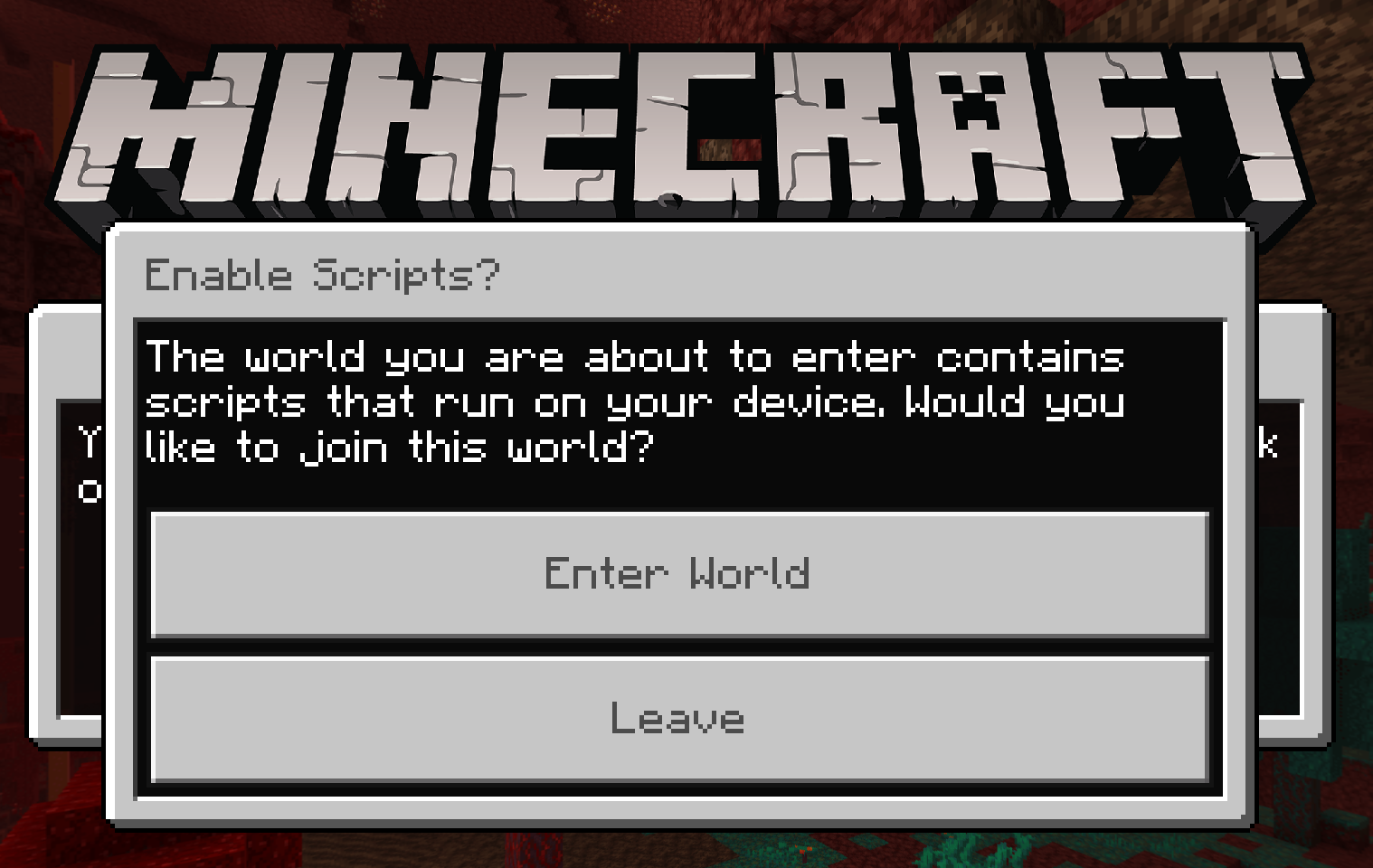 After selecting “Enter World”, you will finally join with your new Minecraft Bedrock Edition world with your new behavior pack installed and …….. nothing happens lol 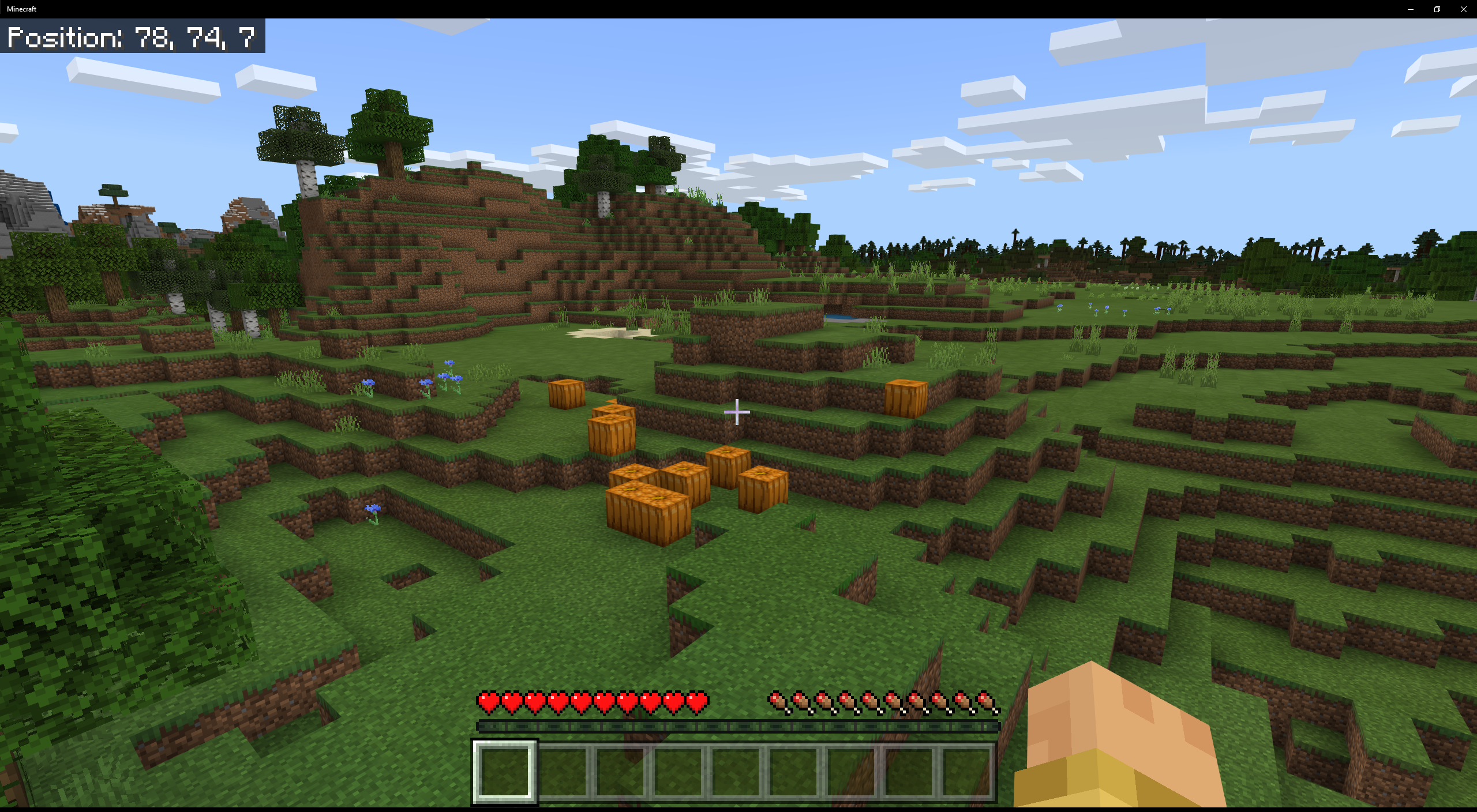 That’s because we haven’t actually written code yet! I guess we should do that now - on to the fun part!

Copy and paste this into your serverScript.js file.

I heavily commented every section of this server script, but I will delve deeper into the different sections.

The systemServer.initialize = function() { function is the first method that gets called immediately after the system is registered. It will run as soon as the script loads at world start. You can use this to set up the environment for your script: register custom components and events, sign up event listeners, etc. This will run BEFORE the world is ready and the player has been added to it. This function should be used to initialize variables and setup event listeners. You shouldn’t try to spawn or interact with any entities at this point! You should also avoid interaction with UI elements or sending messages to the chat window since this is called before the player is ready.

The systemServer.update = function() { function gets called once every game tick. The server and client tick at 20 times per second. This is a good place to get, check, and react to component changes.

The systemServer.shutdown = function() { function gets called when the Minecraft Script Engine is shutting down. For the client this is when they leave the world; for the server this is after the last player has exited the world.

The systemServer.log = function(...items) { function is just a custom function I have set up to make logging things to the world’s chat easier. You can create any number of custom functions and tie it to the systemServer object. Just make sure to not overwrite any methods that come pre-installed on it.

So, for the sake of keeping this tutorial extremely simple, the only true functionality this server script provides is printing out “Server!” to the world’s chat once per second. First, we use the .initialize() method to set up our counter variable. Then, in the .update() function, if the it has the value 20 we print Server!, the increment counter. The reason we chose 20 is because the .update() function ticks 20 times per second. If we instead printed a message every single tick, the chat would just become a blur! We never use the .shutdown() method because nothing we used needs to be cleaned up.

Now that we know everything about this script, let’s test it out! Load up the Minecraft world you created earlier! 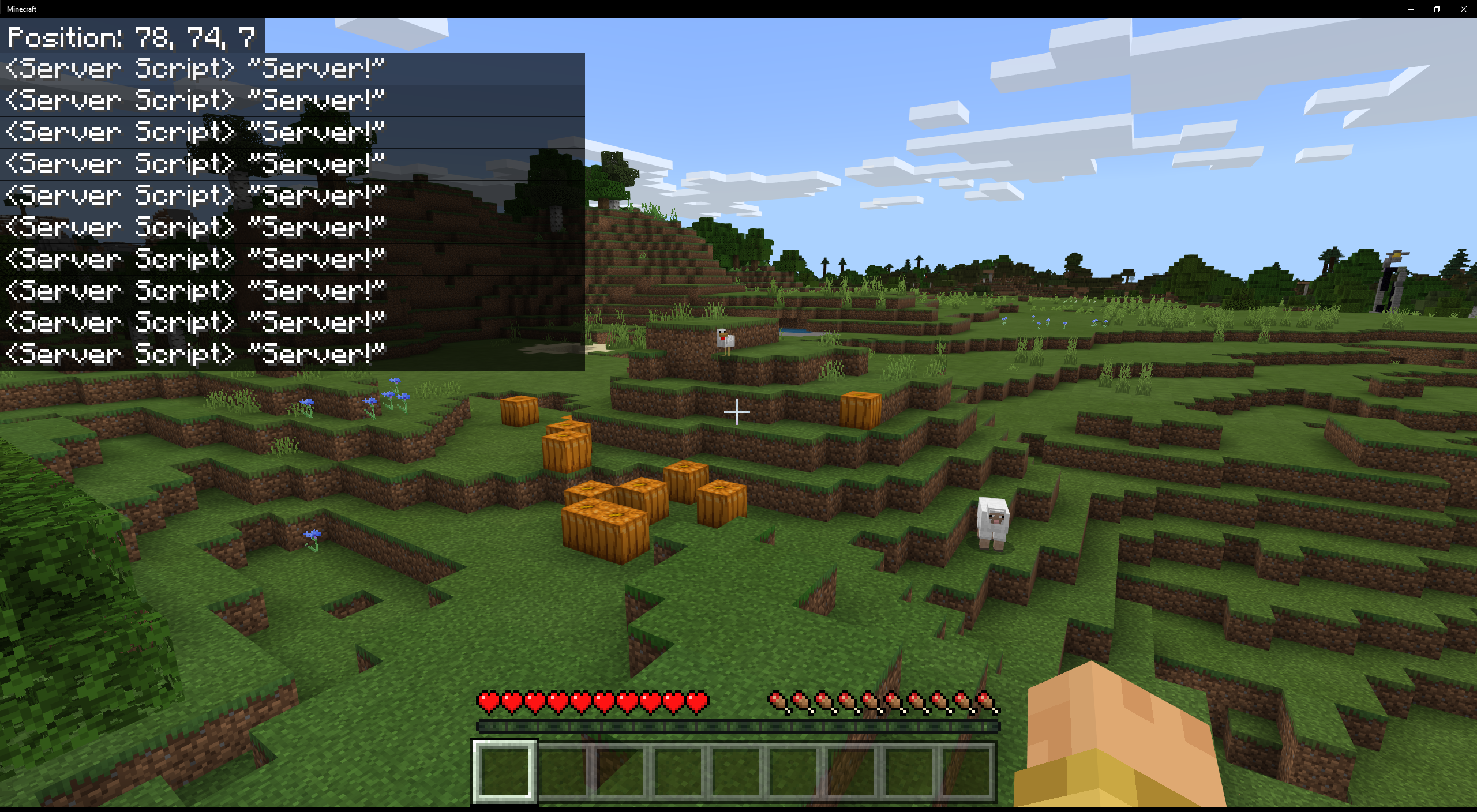 Now, on we go to the client Javascript.

Copy and paste this into your clientScript.js file. I will delve into its contents in a second.

You should see many similarities between the clientScript.js and the serverScript.js. The only difference between them is wherever you see the word server, we switched it to client.

That should be it! Load back up your Minecraft world. 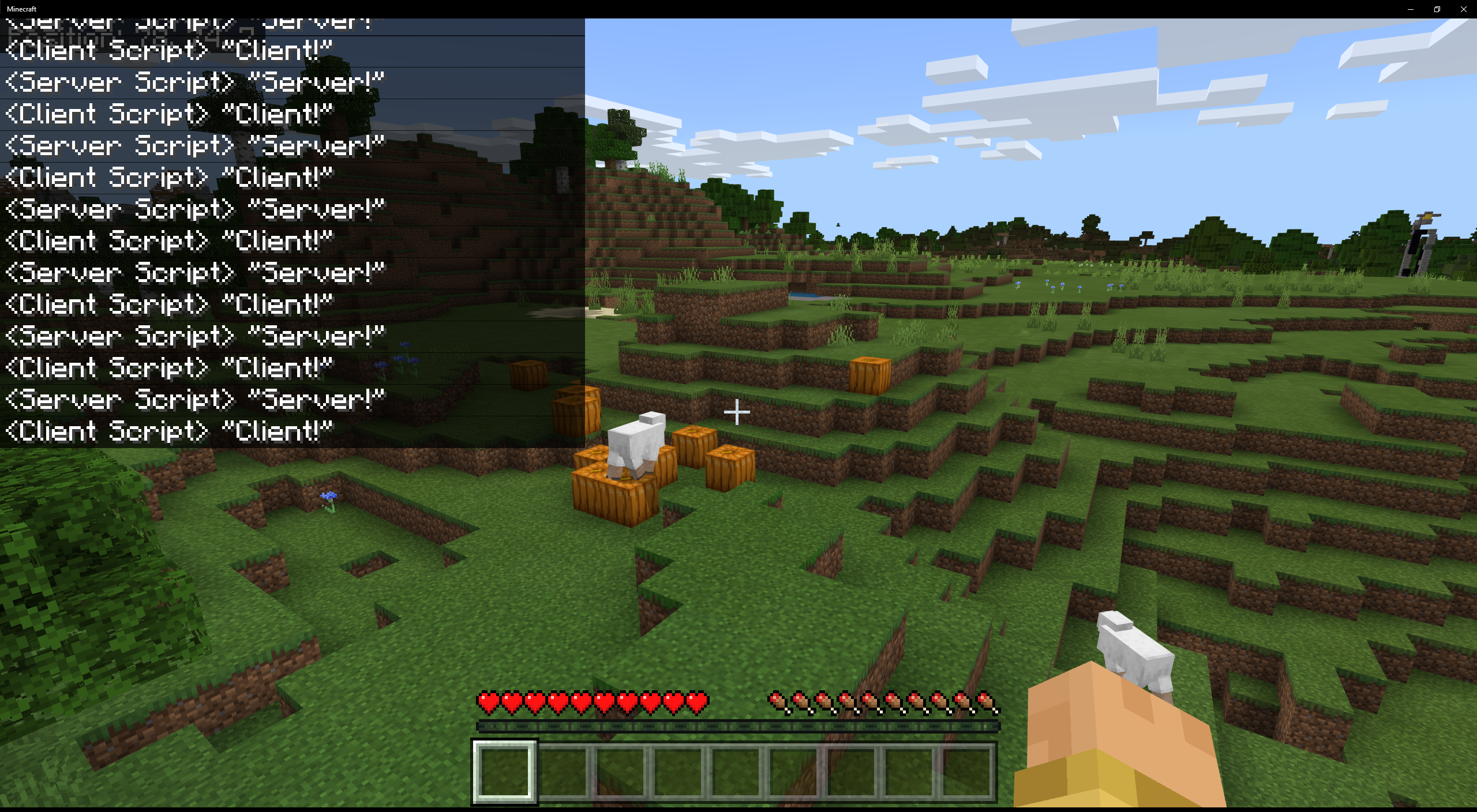 The game should print “Server!” and “Client!” to the chat once per second.

Bundling your behavior pack into an Addon

So how can other people play your brand new, never before seen Minecraft Bedrock Edition addon? Microsoft created a super simple way to bundle up your behavior pack into a single file.

Go into File Explorer and find your behavior pack. Remember, you can find that here (replace <USERNAME> with your Windows 10 username):

Right click the HelloWorld folder and and zip it (choose send to > compressed(zipped) folder). Now simply change the extension [by renaming the file] from .zip to .mcpack.

When a user double-clicks on the file, it’ll be automatically opened by, and imported to, Minecraft for them to use (it’ll be located in .../com.mojang/behavior_packs).

If you made it this far - congrats! You’re now an official Minecraft Bedrock Edition modder!

If you want the source code from this tutorial, you can download the pack here.