A manifest is a file that defines your pack to Minecraft. It stores all sorts of important info about your pack. Like all other code files in your pack, it’s written in JSON.

Let’s create our Resource Pack manifest first by copying the code below into RP/manifest.json (In other words, in a manifest.json file in your resource pack folder, which is located in development_resource_packs).

Let’s break up the code now.

Note: if Mojang decides to add something else to the manifest syntax, they’ll create a newer format version. Your manifests can left unchanged, but it’s recommended to create the new ones with “format_version” set to the new number and the new syntax used. If this ever happens, it will be mentioned in a changelog, and this site will be updated.

# The next step is, naturally, creating your BP/manifest.json. it is very much like a Resource pack manifest, except the “type” is “data” (for a Data Pack/Behavior Pack). There’s also an optional field “dependencies”, where you can define the needed resource packs by including their main UUID. Dependent resource packs will be applied to any world with the behavior pack automatically, if they exist on the device.

Remember that same UUIDs cannot be used twice, which means that you have to generate NEW ones for the behavior manifest, and not use the ones already used in the resource manifest.

The last thing to do is to add your pack_icon.png file to both the BP and RP folders.

I’m going to use this image here for the BP:

And this one for the RP:

If you have done everything correctly, your packs should show up in Minecraft now!

Now to create a testing world to test your new addon!

Now activate your behavior pack. If you haven’t set up dependencies in the manifest, apply your resource pack too, otherwise, it’ll be applied automatically). Check if [EX](Experimental Gameplay) is turned on, and click ‘Create’. You might need a separate ‘Infinite’ world to test entity spawning too.

Now it’s time to talk about some file extensions you’ll be using during the development. ___

An .mcstructure file literally includes a Minecraft structure, consisting of blocks and entities. It can be exported via a Structure Block(*/give @s structure_block*) and is Win10 Edition only. If you store one of these files in the BP/structures folder you’ll be able to ‘load’ the structure from structure blocks on any world with the pack applied. (A reliable method to transfer structures between worlds!). See the Custom Structures article to make your Structures automatically generate in your world! 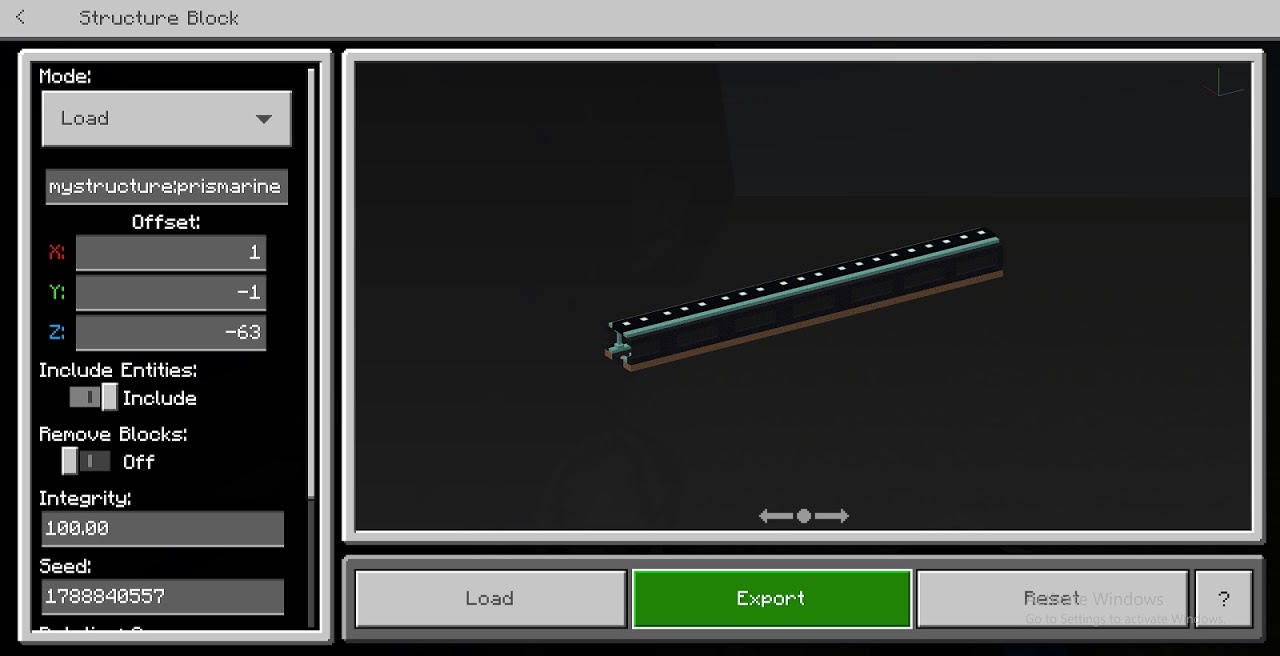 An .mcfunction file is a file holding a function, a.k.a a bundle of commands.. Let’s create one in BP/functions/. VSC will treat it like a normal .txt file. Let’s name the new text file diamond_tools.mcfunction and write a set of simple slash commands[but without slashes(/)], which can otherwise be executed from in-game chat, like these: 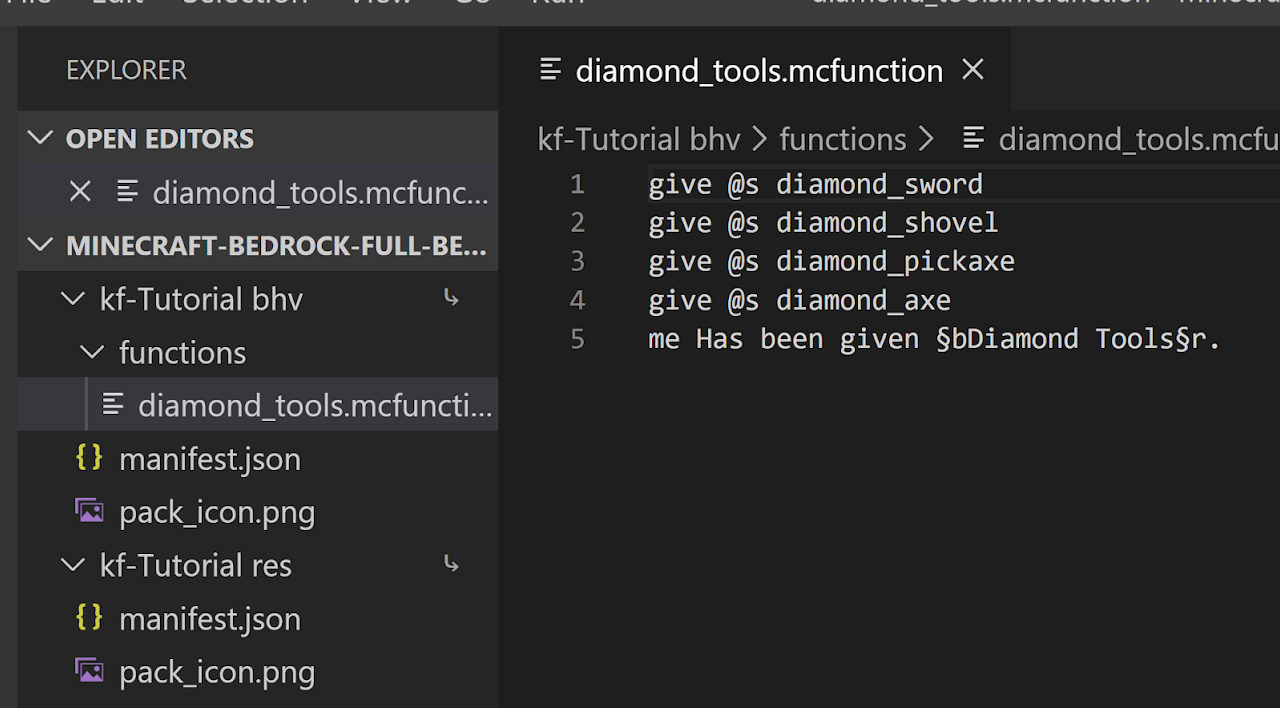 Note: if a command’s syntax in the function is incorrect, the function won’t parse. Watch your content log for errors

Now you can run the function by typing /function diamond_tools (/function {filename}) in the in-game chat! 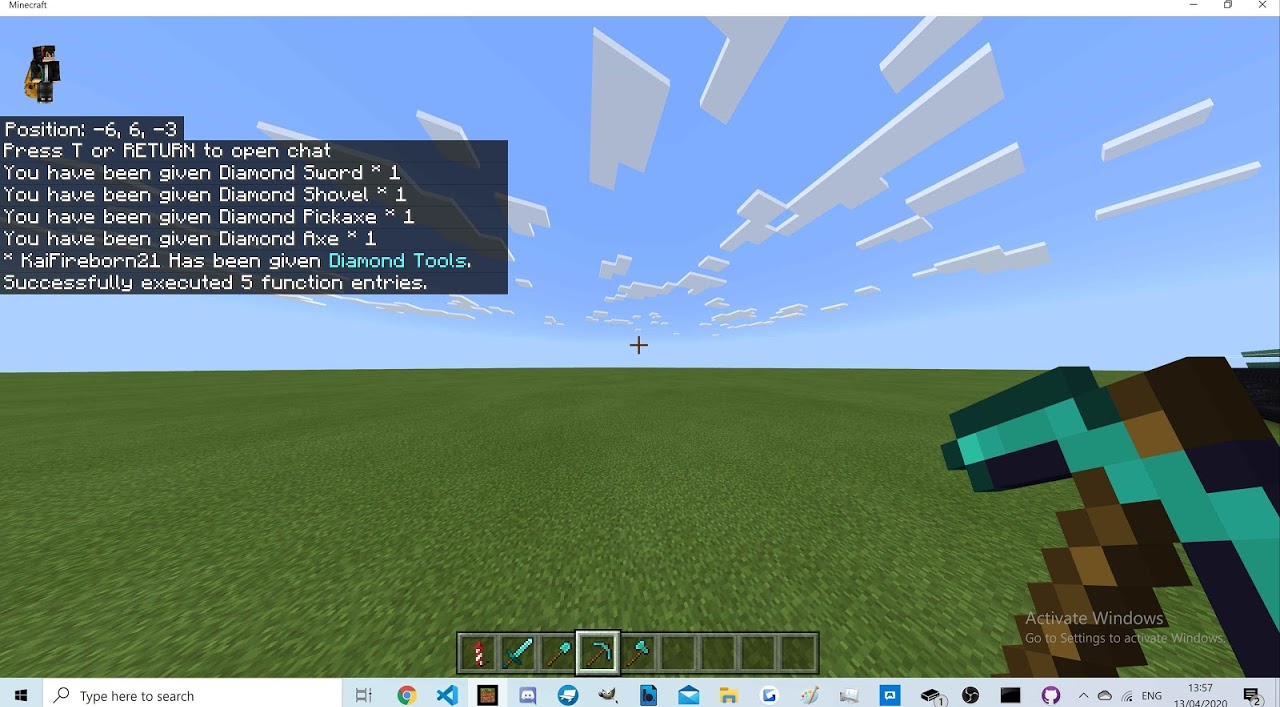 Next up are .mcpack files. These are used to import external addons. To create one, all you have to do is right_click your BP or your RP, and zip it (choose send to>compressed(zipped) folder). Now simply change the extension [by renaming the file] from .zip to .mcpack, to create a file like on the image below. When a user clicks on the file, it’ll be automatically opened by and imported to Minecraft, for them to use (Win10 and iOS). (It’ll be located in com.mojang/..._packs)

What if you want both your resource pack and your behavior pack to be imported at once? Make both .mcpacks, then select them and choose send to>compressed(zipped) folder. Then change .zip to .mcaddon. Done!

Note: Some external programs like AJG and bridge do that automatically

Note: same method can be used to compile a world folder from com.mojang/minecraftWorlds and changing the .zip to .mcworld. On Win10 devices one can click “Export world” in the world settings to achieve the same result. .mcworlds usually include all addons applied (as long as they come from ..._packs.).

Your progress so far:

What are you to do next: